Five years of GST: Neither consumers nor states find it 'good' or 'simple' Featured 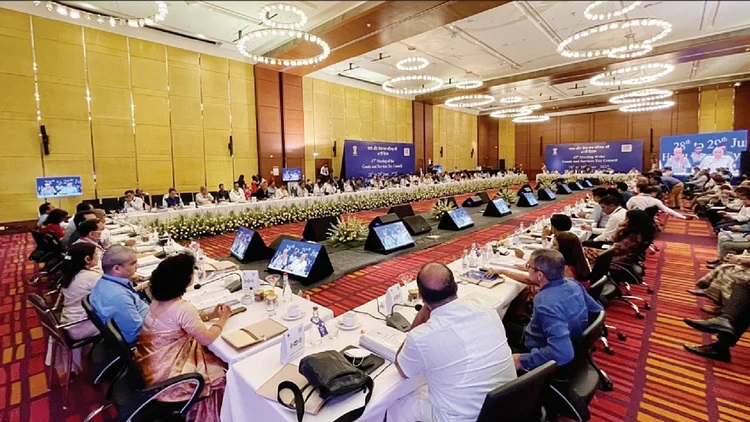 Union government has issued 869 notifications, 143 circulars and 38 orders to modify GST rules since 2017 as consumers are baffled at inconsistencies and states complain of centralisation

Five years after the Goods & Services Tax (GST) was introduced, the central government claims it has fulfilled its objectives. The Opposition, however, point to a near breakdown of trust between the states and the Union with the latter pocketing the gains and passing the losses to the states. Consumers and taxpayers have also been losers as the former Finance Minister P. Chidambaram points to the ‘complex web of rates, conditions, exceptions and exemptions’ that would leave even an informed taxpayer bewildered.

The ‘Good and Simple Tax’ has been undoubtedly good for big, organised companies, Chartered Accountants and tax lawyers as litigations have soared; but the GST has not been so good or simple for the consumer, the states or the small and the unorganised sector.

The Council has not been able to evolve any consensus on bringing petroleum products and liquor under the GST. They are the few of the prominent products left out for the states to impose Excise Duty, leading to prices fluctuating from state to state. Nor has there been any decision on imposing GST on the proceeds of betting in casinos, lotteries and the racecourses.

But the Chandigarh meeting decided to impose GST on milk products like Paneer (cottage cheese) and Chhach (butter milk), on jaggery and fish. Ink, pencils and pencil sharpeners, it decided, would now attract GST at 12% and 18%. While LED bulbs will be taxed at 18%, puffed rice would be taxed at 5%. Polished diamonds, however, would attract a GST of just 1.5% though Aatta would be taxed more.

The Karnataka bench of the Authority for Advance Rulings in 2020 ruled that parathas would be subject to a higher GST rate of 18% while rotis, chapatis, and khakhra are 5%. Likewise, shampoo and stationery like pens made of base metals attract 28% GST since it is categorized as luxury items while diamonds fall under a special tax bracket of 0.25% and 3%. Even soap and toothpaste attract 18% while toothbrushes, including electric ones, attract 5%. Floss made of yarn has a GST of 12%. A chartered accountant pointed out that pizza is taxed at three different rates under GST. “A pizza topping is different from a pizza, as decreed by the Haryana Authority for Advance Rulings on GST,” he says referring to how ridiculous the framework is.

Baffling? Not quite. The GST Council is adding products to the list which are consumed in large quantities and which therefore can fetch it more revenue. There is already talk of exempted ‘services’ being brought under its ambit. But while the bewildering array of tax rates, six in all, and categories (fried, packaged, over the counter, home delivered, consumed in the restaurant or outside) continue to leave consumers at the mercy of tax collectors.

There is even greater outrage because the taxes are being imposed when inflation and unemployment are high. The Government is seen to be taxing people who are vulnerable as in the case of hotel rooms charging tariff up to Rs.1,000 per day. But GST imposed on hospital beds costing Rs.5.000 or more per day is aimed at the middle class. The hospitals do not seem too happy at the imposition, arguing that hospital rooms are not the same as hotel rooms.

An increase in the collection of GST indicates an increase in consumption, which is a positive development for the economy. But it may also simply reflect higher prices leading to higher tax collection.

Though brought in as ‘One Nation, One Tax’, small businesses are disillusioned. Small and medium enterprises say that while GST was meant to create a unified market that would encourage entrepreneurs and create jobs, it has achieved just the opposite. It is also doubtful, they say, that formalisation of the economy has actually widened the tax base and raised the tax-GDP ratio.

“What we see after five years are multiple rates and a never-ending filing and reporting requirement. This has turned the entire exercise into anti-small businesses and anti-first time entrepreneurs,” says K Raju, who operated a spare parts unit in Dharavi. The unit which employed eight people did not survive the GST onslaught. “After micro units like us came under the ambit of taxation, it became tough. The fact that GST was preceded by Demonetisation in the previous year made things worse,” he says.

Micro enterprises like Raju’s unit had to pay 18% GST. “Recently, Covid worsened the financial situation. Now I am in debt trying to repay Rs.10 lakh,” he reveals. Several hundred units to his knowledge have shut down for similar reasons, he claims.

“There is a need to balance revenue augmentation measures and ensure ease of doing business. A change in mindset coupled with a hard look at reforms will go a long way in providing further thrust to India’s economy as we continue the road to recovery post-pandemic,” Mahesh Jaisingh, partner, and National Indirect Tax Leader at Deloitte argues.

Chartered accountant DV Anjaneyulu says that the purpose and intent of the GST law were clearly intended to ease compliance for businesses. “But over-restrictive rules, misunderstanding of provisions by officers, over-compliance for small businesses, etc., have unsettled businesses. Small businesses can realise more benefits from GST only when these pressing issues are resolved,” he says.

Economist Dr Bharat Jhunjhunwala agrees. “The small and medium enterprises have been rendered a blow by GST. All their businesses have been handed to the big businesses on a platter. The economy has been grounded as a result. What this has failed to recognise is that SMEs contribute to the economy by using more workers and fewer machines. They generate employment and the resulting incomes of the workers and small businesses generate demand in the market.”

What the Government has missed out is that it is the MSME sector that contributes the most to both exports and employment. “A flawed GST has led to large-scale destruction of the MSMEs, a sector that contributes up to 90% of the jobs in the manufacturing sector. Small businesses that are not either registered or are not required to be registered under GST have been cut out of the supply chain,” asserts P. Chidambaram.

When GST was introduced in 2017, states were guaranteed that their revenue would grow at 14% per annum once GST settled down. For the first five years a shortfall in revenue was expected and the Centre offered to compensate for the shortfall. A Compensation Cess was levied and the states were to be reimbursed out of this fund.

While the five-year term for compensation expired on June 30, 2022 and the GST Council decided to continue with the Cess, no decision has been taken or communicated to the states that they would continue to be compensated for revenue shortfalls. Why collect the Cess if it is not to be shared with the states, asked former Union Finance Minister P. Chidambaram.

Not a single state has achieved an annual revenue growth of 14% since 2017. When the shortfall in revenue became large and glaring, and which could not be compensated by the cess, the states were forced to go for loans. It added to their burden and they objected, but the objections were overruled, adding to the deepening distrust between the Union Government and the states.

A study by credit rating agency ICRA shows that 22 state governments reported a fiscal deficit of Rs 3.2 trillion in the first seven months of FY-22, up from the pre-Covid level of Rs. 2.3 trillion. The cause of the higher deficiency was a meager increase of 4.2% in state governments' tax and non-tax revenue compared to the pre-pandemic period.

If the finance ministers of the opposition-ruled states are to be believed, even BJP-ruled states are unhappy but they are unable to voice their discontent. The finance ministers of non-BJP states have to agree with what the majority says in the GST Council because otherwise the arrears of compensation would not be distributed or would be delayed.

The Union Finance Minister presides over the GST Council and the Revenue Secretary is the Convenor. The meetings push through pre-determined agenda with no real discussion. The façade of a discussion is maintained but the voting is so skewed that whatever the Union Government decides is what the Council approves, said a state finance minister.