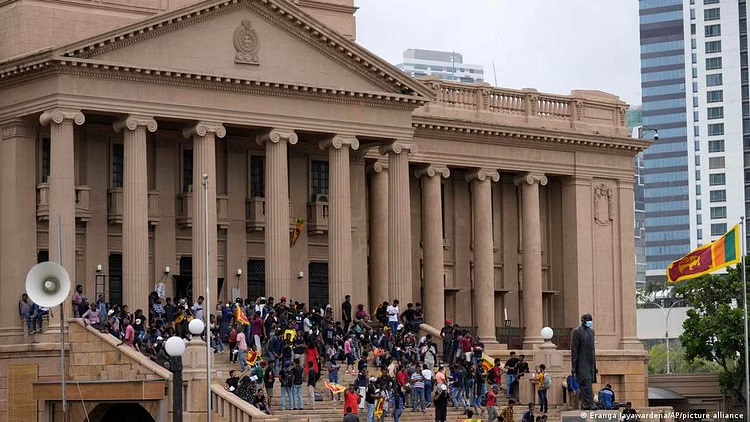 UN Secretary-General Antonio Guterres is following developments in Sri Lanka closely and calls on all stakeholders to engage in dialogue to ensure a "smooth transition" of government and to find sustainable solutions to the economic crisis, his spokesman said on Monday.

After the July 9 protest, both President Rajapaksa and Prime Minister Wickremesinghe offered to resign to pay the way for an all-party government.A statement issued by UN Guterres' spokesman said that the Secretary-General continues to follow developments in Sri Lanka closely and stands in solidarity with the Sri Lankan people.

The UN chief calls on all stakeholders to engage in dialogue to ensure a smooth transition of government and to find sustainable solutions to the economic crisis, the statement said.

The Secretary-General also condemned all acts of violence and called for those responsible to be held accountable, underlining the paramount importance of maintaining peace.

He stressed that the United Nations stands ready to support Sri Lanka and its people.

The decision was taken during a crucial all-party leaders meeting held earlier in the day.

President Rajapaksa is yet to resign formally; however, he informed the Speaker on Saturday that he will quit on July 13. Prime Minister Ranil Wickremesinghe also said that he will step down after a new government is formed.

After receiving Rajapaksa's resignation on Wednesday, Parliament will convene on July 15 to announce the vacancy and will reconvene on July 19 to accept the nominations for the post, Speaker Abeywardena said.

A parliamentary ballot will be held on July 20 to elect the new president, he said.

Rajapaksa agreed to bow down to the party leaders' request to resign following the popular uprising on Saturday.

Under the Sri Lankan Constitution, if both the president and prime minister resign, the Speaker will serve as acting president for a maximum of 30 days.

The Parliament will elect a new president within 30 days from one of its members, who will hold the office for the remaining two years of the current term of President Gotabaya.

President Rajapaksa had appointed Wickremesinghe as prime minister in May after his elder brother Mahinda Rajapaksa was forced to resign amidst growing pressure on the government over the mismanagement of the economy.

Video broadcast on Sri Lankan television and on social media showed protesters entering the President's House - Rajapaksa's office and residence in the commercial capital of Colombo - after breaking through security cordons placed by police.

Protesters did not spare Prime Minister Wickremesinghe despite his offer to resign and set on fire his private residence in an affluent neighbourhood in the capital.

Incidentally, the Sri Lankan Army has dismissed claims that it shot directly at protesters who attempted to enter embattled President Gotabaya Rajapaksa's official residence in central Colombo's high-security Fort area during the weekend.

In a media statement, the Army on Sunday said that its attention has been drawn to a few video clips going viral claiming that the Army troops opened fire at protesters in order to cause intentional harm to them when they were attempting to forcibly enter the President's House compound on Saturday afternoon, Colombo Gazette reported.

The Army categorically denied having opened fire towards the protesters, but said it fired a few rounds in the air and towards the sidewalls of the main gate entrance to the President's House compound as a deterrent, aimed at preventing the entry of the protesters into the compound, it added.

The Army said that firing into the air and sidewalls do not therefore necessarily mean that those Army personnel on duty were intent on causing deliberate harm to the protesters, it reported.

Sri Lanka, a country of 22 million people, is under the grip of an unprecedented economic turmoil, the worst in seven decades, leaving millions struggling to buy food, medicine, fuel and other essentials.

Tens of thousands have taken to the streets in recent months, calling for the country's leaders to resign over accusations of economic mismanagement.

The country, with an acute foreign currency crisis that resulted in foreign debt default, had announced in April that it is suspending nearly USD 7 billion foreign debt repayment due for this year out of about USD 25 billion due through 2026. Sri Lanka's total foreign debt stands at USD 51 billion.