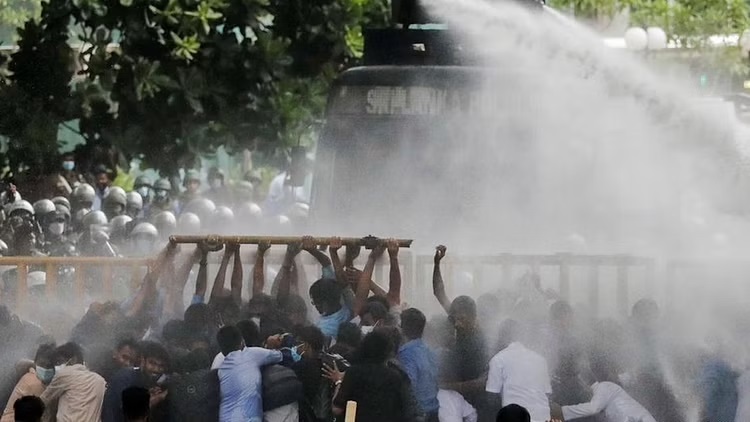 The All-Party consensus to elect a new President under Article 40(1) is the proper course of action in the democratic interest of the island nation.

An unprecedented political crisis has arisen in Sri Lanka, leading to the breakdown of constitutional governance. Unorganised angry protesters, who are deeply affected by economic meltdown, have forced two Prime Ministers – Mahinda Rajapaksa and his successor Ranil Wickremesinghe – to resign, and drove out the executive President Gotabaya Rajapaksa to high sea before storming the presidential residence in Colombo.

Sri Lanka, formerly known as Ceylon, is an island in the Indian Ocean. The island, after its tryst with the Portuguese and the Dutch for two centuries, fell into the hands of British imperial power in 1815. Anglo-Saxon jurisprudence was soon implanted by the British colonial masters.

However, following the recommendations of the Soulbury Commission, Ceylon achieved independence in 1948 under the Ceylon Independence Act 1947 passed by the imperial British Parliament.

Unlike the freedom movement in India, the Ceylon National Congress, influenced by constitutionalists under Ceylonese statesman and the first Prime Minister of Ceylon D.S. Senanayake, didn’t openly confront the British imperialists. Even after independence in 1948, due to the lack of political readiness, Ceylon continued dominion status under the British crown for more than two decades. It was only in 1972 that Ceylon adopted a Constitution to become a republic. It then changed its name under Buddhist influence to Sri Lanka.

However, a new Constitution was enacted in 1978 with an all-powerful executive President and Buddhism as the State religion. The declaration of Buddhism as State religion reportedly sowed the seeds of ethnic conflict in the island. It made the 12 per cent Hindus, nine per cent Muslims and eight per cent Christians in the island nations lesser citizens.

The Tamils in the northern part of the island intensified a separatist movement. Sri Lanka has not been at peace since then.

On Buddhist nationalists’ demand, a strong military has been raised, putting burden on the State exchequer to the extent of 5.9 per cent of the Gross Domestic Product (‘GDP’) in 1995, which is a factor in precipitating the present economic meltdown.

The causes for the economic woes of Sri Lanka are not too many to seek. They lie in the meagre foreign exchange reserve of $ 50 million as of May against its foreign debt default, which was at $ 51 billion in April. Of this, about 10 per cent are on onerous terms with China on infrastructure projects.

Even though a sovereign nation cannot go bankrupt in a legal sense – since its central bank can always print currency, default in serving its foreign debt repayment of $7 billion due this year has dangerous international consequences for a nation which depends on imports, particularly that of essential items.

The annual import bill of Sri Lanka is reportedly well into billions for buying oil, fertiliser, and food, among other things. However, with bottomed-up forex reserves of $0.55 billion, Sri Lanka reached a dead end, disrupting the supply of fuel, power and food.

Sri Lanka immediately needs about $3 billion, reportedly to tide over the crisis. In the meantime, prices are soaring high, with inflation jumping to over 54 per cent last month. Why shouldn’t people scream?

The political turmoil in Sri Lanka, as a direct fallout of economic mismanagement, has assumed greater importance. Her strategic importance in the Indian Ocean has put a serious question mark on geopolitical security issues. Its biggest lender China, which has lent over $5 billion, is not far away!

This doctrine of necessity has found its way into some other nations also. In 2010, the Nigerian Parliament created the Office of Acting President and appointed the then Vice-President Goodluck Jonathan on the ground of necessity to fill the constitutional vacuum in the absence of then incumbent President Umaru Yar’Adua due to the latter’s prolonged hospitalization, in spite of the country’s Constitution not expressly allowing the same.

Let us hope Sri Lanka does not fall into this trap of the doctrine of necessity and allows a military takeover. The All-Party consensus to elect a new President under Article 40(1) is the proper course of action in the democratic interest of the island.

More in this category: « Sri Lanka: UN chief calls for dialogue; Parliament to elect new president on July 20, says Speaker Nancy Pelosi Lands in Taiwan; 'Consequences Must Be Borne by the US,' Says China »