Nancy Pelosi Lands in Taiwan; 'Consequences Must Be Borne by the US,' Says China Featured

New Delhi: A US Air Force plane carrying House of Representatives Speaker Nancy Pelosi landed in Taiwan’s capital, Taipei, around 10 pm local time on Tuesday, August 2. Her visit to Taiwan has sparked a full-blown diplomatic row between the US and China.

Pelosi and her delegation disembarked at Songshan Airport in downtown Taipei and were greeted by Taiwan’s foreign minister, Joseph Wu, and Sandra Oudkirk, the top US representative in Taiwan. Chinese warplanes flew over Taiwan Strait before her arrival.

After Pelosi landed in Taiwan, China announced that PLA will conduct “important military exercises and training activities including live-fire drills” in six regions surrounding the Taiwan island from Thursday, August 4, to Sunday, August 7, according to Global Times.

For her part, moments after landing in Taipei, Pelosi put out a tweet about “America’s unwavering commitment to supporting Taiwan’s vibrant Democracy”.

Our discussions with Taiwan leadership reaffirm our support for our partner & promote our shared interests, including advancing a free & open Indo-Pacific region.

The Chinese foreign ministry was quick to hit out and stepped up its warning. “China will definitely take all necessary measures to resolutely safeguard its sovereignty and territorial integrity in response to the US Speaker’s visit. All the consequences arising therefrom must be borne by the US side and the ‘Taiwan independence’ separatist forces,” a statement by China’s ministry of foreign affairs said.

Pelosi and members of a Congressional Delegation also issued a statement upon their arrival in Taiwan.  This visit is the first official visit to Taiwan by a Speaker of the United States House of Representatives in 25 years. 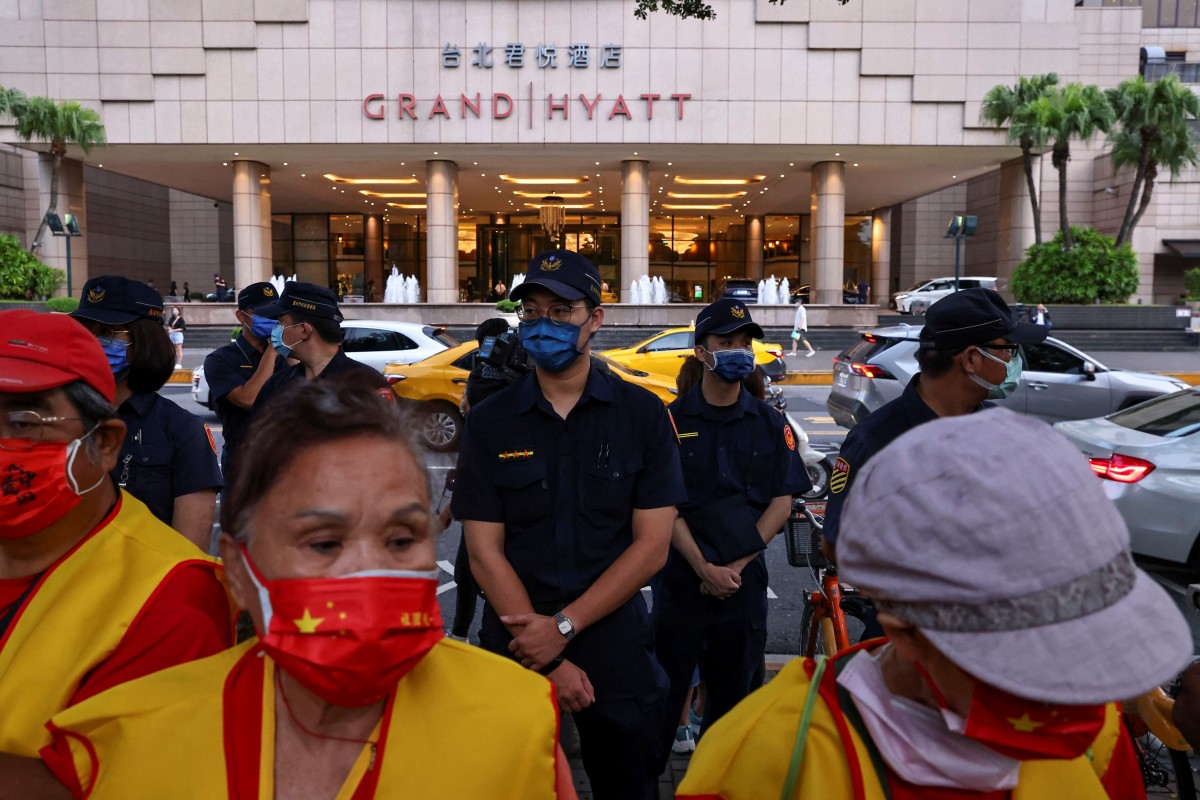 “Our visit is part of our broader trip to the Indo-Pacific — including Singapore, Malaysia, South Korea and Japan — focused on mutual security, economic partnership and democratic governance.  Our discussions with Taiwan leadership will focus on reaffirming our support for our partner and on promoting our shared interests, including advancing a free and open Indo-Pacific region.  America’s solidarity with the 23 million people of Taiwan is more important today than ever, as the world faces a choice between autocracy and democracy,” the statement said.

Continuing further, it said, “Our visit is one of several Congressional delegations to Taiwan – and it in no way contradicts longstanding United States policy, guided by the Taiwan Relations Act of 1979, U.S.-China Joint Communiques and the Six Assurances.  The United States continues to oppose unilateral efforts to change the status quo.”

The Chinese foreign ministry put out a series of tweets, slamming the US. Its spokesperson in a tweet said:

When the House Speaker, being the third-highest ranking figure in the US government, flies on US military aircraft and makes a provocative visit to the Taiwan region, it is by no means an unofficial action.

Quoting Chinese foreign minister, Wang Yi, Xinhua News said, “It is shameful that the United States breaks faith with its promise on the Taiwan question, which will only lead to the bankruptcy of its national credibility.”

Since last week, China’s People’s Liberation Army has conducted various exercises, including live-fire drills, in the South China Sea, Yellow Sea and Bohai Sea, in a show of Chinese military might.

A visit to Taiwan by Pelosi, who is second in the line of succession to the US presidency and a long-time critic of China, would come amid worsening ties between Washington and Beijing.

Pelosi was on a tour of Asia that includes announced visits to Singapore, Malaysia, South Korea and Japan. Her stop in Taiwan had not been announced but had been widely anticipated.

China claims self-ruled Taiwan as its own, and a foreign ministry spokesman had said earlier this week that any visit by Pelosi would be “a gross interference in China’s internal affairs” and warned that “the Chinese People’s Liberation Army will never sit idly by.
Nancy Pelosi‘s long history of confronting Beijing

More than 30 years ago, US Representative Pelosi angered China’s government by showing up in Tiananmen Square and unfurling a banner honoring dissidents killed in the 1989 protests.On Tuesday, as speaker of the House of Representatives, Pelosi disregarded China’s fiery warnings and landed in Taiwan to support its government and meet with human rights activists.

Pelosi‘s trip to Taiwan capped her decades as a leading US critic of the Beijing government, especially on rights issues, and underscores the long history of the US Congress taking a harder line than the White House in dealings with Beijing.

Second in line for the presidency after Vice President Kamala Harris, Pelosi became the most senior US politician to travel to Taiwan since then-Speaker Newt Gingrich in 1997. She led a delegation of six other House members.

In 1991, two years after China’s bloody crackdown on pro-democracy demonstrations, Pelosi and two other U.S. lawmakers unfurled a banner in Tiananmen reading, “To those who died for democracy in China.”

Police closed in, forcing them to leave the square.In 2015, she took a group of House Democrats to Tibet, the first such visit since widespread unrest in 2008. Pelosi has regularly spoken out about human rights issues in Tibet and has met the Dalai Lama, whom Beijing reviles as a violent separatist.

China views visits by US officials to Taiwan as sending an encouraging signal to the island’s pro-independence camp. Washington does not have official diplomatic ties with Taiwan but is legally bound to provide it with the means to defend itself.

Kharis Templeman, a Taiwan expert at Stanford University’s Hoover Institution, said Pelosi, who is 82, would be looking to cement her legacy while signaling support for Taiwan against pressure from Beijing.

“And what better person to send that signal than the speaker of the House herself? So she’s in a very powerful symbolic position to take a stand against the CCP,” Templeman said, referring to the Chinese Communist Party.Beijing considers Taiwan part of its territory and has never renounced using force to bring the island under its control. Taiwan rejects China’s sovereignty claims and says only its people can decide its future.

Chinese foreign ministry spokesman Zhao Lijian said a trip would lead to “very serious developments and consequences.”Analysts said Beijing’s response was likely to be symbolic. “I think China has tried to signal that their reaction would make the US and Taiwan uncomfortable, but would not cause a war,” said Scott Kennedy, a China analyst at Washington’s Center for Strategic and International Studies.

Congress has long taken a harder line on Taiwan than the White House, no matter whether Democrats, such as President Joe Biden and Pelosi, or Republicans are in charge.Republicans supported Pelosi‘s trip. “Any member that wants to go, should. It shows political deterrence to President Xi,” Representative Michael McCaul, the top Republican on the House Foreign Affairs Committee, told NBC News. McCaul said he was invited to join Pelosi‘s Asia trip but was unable to do so.

The executive branch takes ultimate responsibility for foreign policy but relations with Taiwan are one area where Congress wants influence. The Taiwan Relations Act, which has guided relations since 1979, passed Congress with an overwhelming majority after lawmakers rejected a proposal from then-President Jimmy Carter as too weak.

Democrats and Republicans in the US Senate are working on a bill that would overhaul that policy, including by increasing military support for Taiwan and expanding Taipei’s role in international organizations.

Pelosi‘s trip and Beijing’s reaction have pushed the White House to once again express – including in a call between Biden and Chinese President Xi Jinping last week – that it has no desire to change the status quo.

Biden cast doubt publicly on the wisdom of the trip last month in a rare break with Pelosi, a close ally.“I think that the military thinks it’s not a good idea right now, but I don’t know what the status of it is,” Biden told reporters.

Pelosi‘s office refused ahead of the visit to rule out or confirm a possible stop by the Speaker, citing security concerns typical for top US officials.Pelosi announced on Sunday that she was leading a congressional delegation to Singapore, Malaysia, South Korea and Japan “to reaffirm America’s strong and unshakeable commitment to our allies and friends in the region”. US defense officials played down the risk of China’s military interfering with Pelosi‘s visit, but they worried that an accident could spiral into a larger conflict.

More in this category: « Experts hope Sri Lanka doesn’t fall into trap of doctrine of necessity and allow military to take over China Has Built Watchtowers in Occupied Ladakh Territory: Report »