A Yatra in the time of angry anchors Featured 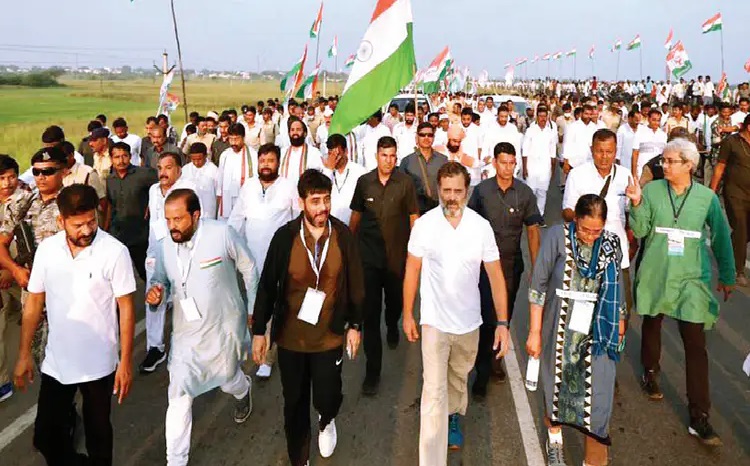 Despite the media’s best efforts to invisibilise the Bharat Jodo Yatra, it has gathered not just crowds but great moral capital as well.

It was a dogfight with a difference and it featured our TV channels. They were all in it a few days ago, discussing most animatedly a fight between citizens over stray dogs. That’s a good debate, I admit. I love dogs and have spent some of my happiest moments in their company. Their care, pet or stray, is our responsibility.
But for our news channels to prioritise this discussion when citizens wait for the day’s important developments is either an unwitting deviation or one by design that can barely conceal that it is so. That so many of them sought the deviation is a comment on the state of our news channels, pet or stray.

This was happening at a time when unseasonal rains had caused havoc to standing crop, the rupee had tumbled further, the Supreme Court was equivocating on the remission of sentence to convicts of the Bilkis Bano gangrape case, India had slid further down the Global Hunger Index, the Congress presidential elections were on and the Bharat Jodo Yatra had seen a massive turnout in an area where it was least expected to have mass support.

It’s no longer necessary to argue that our TV news has acquired the form of a wall between citizens and the government, blocking the very information they are supposed to bring to citizens. We no longer have any reliable or credible way of ascertaining the popularity of these channels, but anecdotal accounts suggest quite clearly that most regular consumers of TV news have switched to other modes of receiving news and information. Is print media any different? Sadly, no. It is only small-circulation newspapers and/ or non-corporate productions that are managing, if at all, to spread ink on paper to serve the hallowed purpose for which newspapers came into existence.

It’s not even only the media—most other pillars of our democracy have crumbled under the current regime. This includes not just the institutions that work for, with or alongside the government, nor even only those institutions that are supposed to be counterpoising weights to keep the democracy in balance, it includes the party system itself, the very backbone of Indian democracy. The way the BJP has gone about poaching elected representatives through seduction or intimidation shows how little it cares for the spirit of our Constitution, which provides a mechanism for elected representatives to voice the concerns and interests of citizens.

Another matter that most governments tend to forget, once the ritual of elections is over, is that they are there to work for the people, for the nation. Even worse, people themselves give up their right to be represented, in true spirit, by the people they choose. The five-year interval between two elections becomes a sort of civic holiday. These are harsh words, but a blind citizenry and deaf people’s representatives are together making quite a mockery of the Constitution. Our democracy is in a coma, and the usual ways and means of resuscitating it have been captured by the current regime.

The Bharat Jodo Yatra is showing signs that people might be slowly emerging from this coma-like stupor. Media has tried its utmost to play it down, but thousands and thousands are joining it voluntarily every day. When this long march began on September 7, most predictions were unfavourable, even in circles that do not subscribe to the Sangh/ BJP ideology.

But with the Yatra now close to completing the first half of its 3,570 km pilgrimage, the picture has changed completely. The Yatra has gathered great moral capital.

People have begun to see that Rahul Gandhi is not what the BJP’s propaganda machinery has sought to make of him. He comes across as a humane, determined, perceptive leader of people, full of care for everyone. A child can climb on to his shoulders and feel comfortable there; an old woman can hold his hand and walk with him in dignity, young girls can get close to him and feel the affection of an elder brother. He has acquired through this entirely public spectacle an image that no amount of propaganda can bring to anyone else. Whether the media and the etherised followers of the right-wing ideology admit it or not, Rahul Gandhi has the most magnetic presence in India’s public sphere today.

The moral capital of the Yatra is deepened by its aesthetics—its atmosphere of caring and togetherness and the utter lack of mistrust and communal hatred that has become the default setting of our public life. The swarms joining the Yatra consist of students, farmers, labourers, who are no doubt putting aside everyday commitments and concerns to be a part of it. OBCs (other backward communities) are possibly the most numerous. There are civil society activists, initially wary of associating with the Congress; there are writers, artists, singers, film-makers, all participating with an exuberance that is uplifting, to say the least.

The Yatra has generated social capital too: the most significant impact is seen among the Congress party workers, its karyakartas. For years, they had been clamouring for opportunities to interact with the national leadership. They have got it now and their morale is up, their body language positive. All of this has no doubt created some political capital as well, and the buoyancy you witness in the Yatra seems to augur a seismic political reordering in days to come.

Rahul Gandhi has been candid and convincingly articulate through the Yatra. He has laboured the point that the Yatra has nothing to do with the upcoming state elections; he has repeatedly described it as a ‘tapasya’, a pilgrimage of discovery and introspection. He has also described it as a journey to discover India, to know his country intimately.

His fellow Yatris are also not talking tactical politics but instead of taking politics to a higher plane. They are trying to reset the political vocabulary, to craft a new political idiom, to find a political language that is not marooned in communalism and innuendo, or in divisive rhetoric that keeps invoking the Partition of India and the birth of Pakistan.

Weeks from now, the Yatra will be over, and it certainly won’t get its due from our media. But those who participate in it, those who endorse it, those who speak to anyone who took part in it will speak of politics and public life in a new voice. A new climate of opinion will hopefully have been created, a new interest in keeping democracy and India’s federal structure and diversity alive.

I have no hesitation in saying that the Yatra has opened a new page in India’s political life, a page that might set the agenda for an unfinished freedom struggle, to set our people free in ways we have dreamt of but not yet realised. More in this category: « Stubble burning share in Delhi's pollution rises to 26%, the highest this year Telangana Government Withdraws General Consent to CBI »