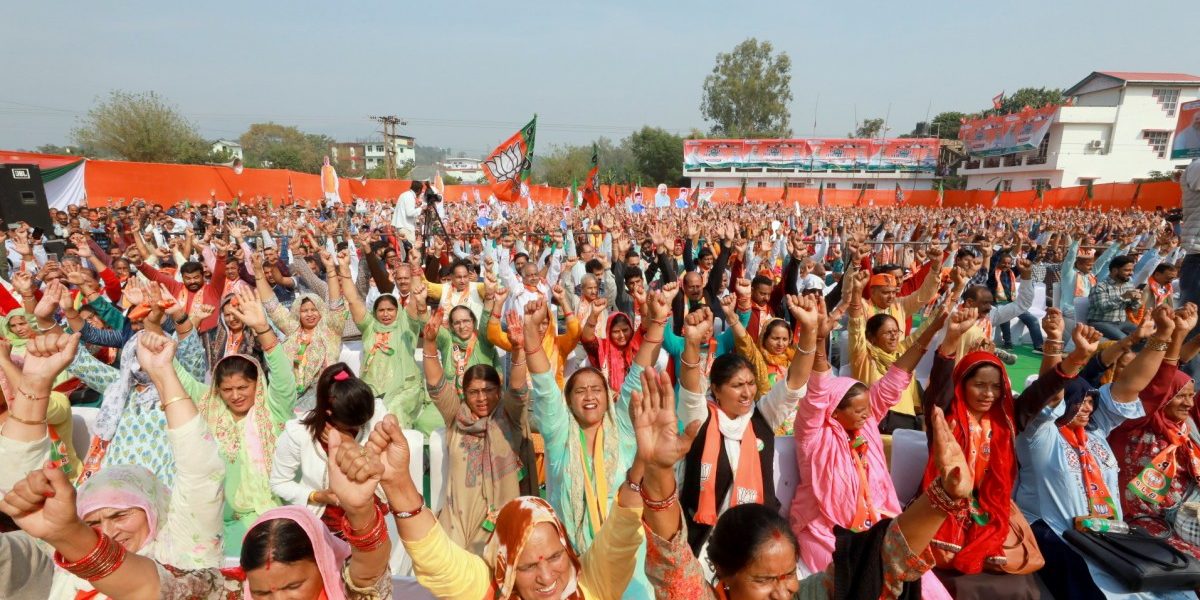 The BJP won nine out of 10 seats in Mandi in the 2017 elections. This time, it has to contend with debutant AAP and also disgruntled leaders.

New Delhi: The fight for the 10 seats of Mandi district of Himachal Pradesh would be crucial for archrivals Congress and Bharatiya Janata Party (BJP) in the assembly polls this time, as they were in 2017 – when the saffron party won nine of these seats, paving the way for the formation of a BJP government.

This time, however, the BJP, apart from having to contend with the presence of the Aam Aadmi Party (AAP), is also facing serious rebellion in several of the seats, which may impact the outcome of the polls.

There are two big battles being fought in this district.

One is in Seraj, where chief minister Jairam Thakur is contesting. But all eyes are on the fight for the Mandi Sadar seat, which reflects how the politics of the state has played out over the past decades.

there are nearly 8.5 lakh voters in the 10 constituencies of the district. The BJP will be confident, given its performance five years ago. While the independent candidate who won the Jogindernagar seat – the only one that the BJP did not win – is a candidate of the saffron party this time, there are several rebel candidates and miffed leaders who may play spoilsport.

Two prominent families battle it out in Mandi

In Mandi, the BJP has given its ticket to Anil Sharma, son of senior Congress leader Sukh Ram, who passed away in May this year. Sukh Ram had served as a Union minister in the Narasimha Rao government. He was by far the most prominent leader of the Mandi region. He was elected to the Lok Sabha three times and five times to the state assembly. His political career was impacted after the recovery of cash from his premises when he was Union communications minister in 1996. He was convicted in the case in 2011. Ram joined the BJP in 2017 but returned to Congress in 2019.

By giving the ticket to Anil Sharma, the BJP has reposed its trust in the family. Sharma had first joined hands with the saffron party in the 1990s, when he and his father were expelled from Congress. They got into a post-poll alliance with the BJP government then. Thereafter, the father-son duo intermittently switched between the two parties.

Sharma was minister twice in the Virbhadra Singh government of the Congress – from 1993 to 1998 and then from 2012 to 2017. He also became a Rajya Sabha MP in 1998. The family enjoys significant support among the nearly 20% Brahmin voters in the district.

Anil Sharma of the BJP (left) and Champa Thakur of the Congress (right).

Meanwhile, the Congress has given its ticket from Mandi to Champa Thakur, daughter of veteran leader and former minister Kaul Singh Thakur, who is also the party candidate from Darang in the district. Incidentally, the senior Thakur was like Anil Sharma a minister in the previous Congress government in the state.

For Anil Sharma, this election could prove to be tough as not only is he up against a Congress candidate who also comes from a prominent political family but he also faces a rebellion of sorts from two other former BJP leaders who would be contesting the elections.

While former state secretary and spokesperson of the BJP, advocate Praveen Sharma, is contesting as an independent, the Aam Aadmi Party has also fielded a former BJP leader in Shyam Lal Thakur.

In Darang, eight-time MLA and former minister Kaul Singh Thakur of the Congress is facing off against Puran Chand Thakur of the BJP. In 2017, BJP’s Jawahar Thakur defeated Kaul Singh from here. This time BJP has changed its candidate. Darang is one of the 21 seats in the state where the BJP has done so. Due to the denial of the ticket to Jawahar, BJP is likely to face opposition from his supporters in the constituency.

Meanwhile, the Aam Aadmi Party candidate here, Sunita Thakur, withdrew her nomination papers on the last day of withdrawal and joined the BJP.

In Seraj, chief minister Jairam Thakur will be in a direct fight with Congress candidate Chetram Thakur. Here, the nomination papers of AAP candidate, advocate Gita Nand Thakur, were rejected during scrutiny.

In 2017 too Jairam and Chetram faced off, and the former won by 11,254 votes. Incidentally, BJP has dominated this constituency for nearly a quarter of a century now, as Jairam Thakur has not lost it since 1998.

The main issue in the constituency is the poor quality of roads. Though Jairam is credited with making the area emerge as a tourist destination, proper road connectivity still remains a major issue. The chief minister also faces opposition due to the slow pace of construction of the promised Government Degree College buildings in Thachi and Gadagusain.

Jogindernagar is another interesting seat that people would be watching keenly since it is here that BJP denied the ticket to Union minister Anurag Thakur’s father-in-law and seven-time former MLA Gulab Singh Thakur due to his age. The party gave its ticket to Prakash Rana who had won the seat as an independent in 2017 but later extended his support to the BJP government.

The Congress has fielded Surendra Pal Thakur while the AAP candidate is Ravinder Paul Singh.

An angry daughter threatened to turn rebel in Dharampur

In Dharampur too the BJP has put up a new candidate. This time, its sitting seven-time MLA and minister Mahender Singh has opted out in favour of his son Rajat Thakur. This was opposed by his daughter, Vandana Guleria, who too was eyeing the seat.

A visibly agitated Vandana, who was a member of Mandi Zila Parishad and general secretary of the BJP Mahila Morcha, had quit the party posts and asked on Facebook: “Why daughters are always sacrificed in familism (sic).” She added in another post: “You can bring ticket from Delhi but not votes.” Though she had indicated that she might contest as an Independent, to BJP’s relief she did not do so.

Meanwhile, the Congress has fielded Chandrashekhar who was also its candidate in the 2017 polls. AAP will be making its debut on the seat through its candidate Rakesh Mandotra.

Apart from these seats, in Balh (SC) seat, Indra Singh Gandhi of the BJP will be fighting against Prakash Chaudhary of the Congress and Tara Chand Bhatia of AAP.In Sarkaghat, the main contest will be between Daleep Thakur of the BJP and Pawan Kumar of Congress. The AAP candidate for this seat is Dhameshwar Ram.

In Karsog (SC) seat, the BJP has fielded Deepraj Kapoor opposite Mahesh Raj of the Congress. The AAP candidate is Bhagwant Singh, who had also contested as an Independent in 2017. The Congress here is facing a rebel candidate too in the form of Yuvraj Kapoor.

In Nachan (SC) seat Vinod Kumar of BJP will be facing off against Naresh Kumar of Congress and Jabna Chauhan of AAP. Here Congress leader Lal Singh Kaushal had filed his nomination as an Independent but later withdrew his candidature. He had lost the seat as a Congress candidate in the 2017 elections.