Congress will implement 'Nyay' scheme in Goa if voted to power in state: Rahul Gandhi Featured 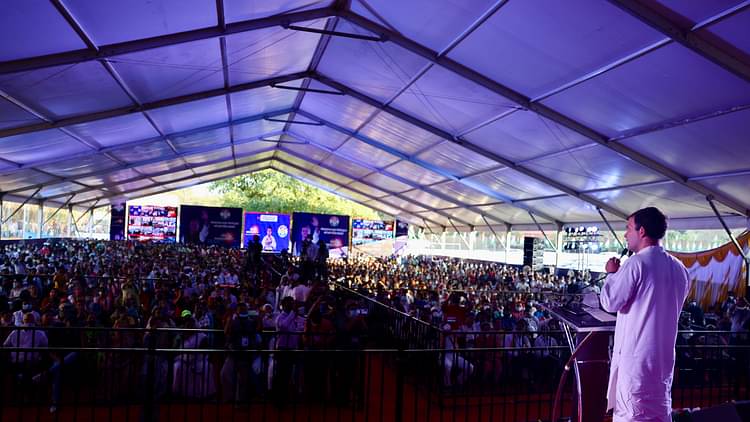 “We have designed a Nyay scheme for Goans under which every month Rs 6,000 will be going directly to the account of the poor of the state. It would be transferred automatically,” Rahul Gandhi said.

Congress leader Rahul Gandhi on Friday addressed a virtual rally ‘Nirdhar’ in Sanquelim to campaign for the Goa Assembly elections in which he promised that if his party came to power in the state, it will implement a 'Nyay' scheme for the poor.

“We have designed a Nyay scheme for Goans under which every month Rs 6,000 will be going directly to the account of the poor of the state. It would be transferred automatically,” he said.

He urged people not to waste their votes by supporting others who are also in the fray. “The reality is that the fight in Goa is between the Congress and the BJP, rest of the political parties are not in the race...that is why do not waste your votes by voting for any other political party," Gandhi said.

He said if the Congress forms a government in the state after the polls, it will represent all Goans.

“It would not be a government of the Congress party. Whatever you desire would be fulfilled by the government,” he said.

The former Congress president said a government led by his party will be run after consulting the people of the coastal state.
“You will remember that many years ago, our elderly people are sitting here that when this decision was given to Goa. So let me first give you an assurance. I want and not only me, all our leaders who are sitting on the stage, we all together give you this assurance want to give. If the Congress government will be formed in Goa, then it will be the government of Goa,” he said.

“The people of Goa will have a government. Our work, whatever you want, for the future of your state. It's our job to do what you want and if we really want to serve you. If you want, then this work cannot be done without talking to you, without discussion,” he added.

"We will not let Goa become a coal hub. Pollution and tourism cannot go together, he said, adding that tourism, the mainstay of the state's economy, will be developed after taking all stakeholders into confidence,” he said.

In a veiled attack on the BJP, Gandhi said two vastly different Hindustans are being created.

“Some days back, I gave a speech in Parliament pointing out that there are two Hindustans that are being created. One is of rich businessmen...that Hindustan has nothing to do with the law... and the other one is of crores of people,” he said.

“There is a Hindustan of selected rich people, of billionaires, of industrialists like Ambani, Adani. Shining houses, Mercedes cars, airplanes, whatever you want, you will find in that rich India. Nothing to do with law in that India,” he said.

“Then there is poor Hindustan, unemployed Hindustan... where you will not get education, health infrastructure and not even jobs under MNREGA (rural employment scheme),” he said.
“In this India, you will neither get education, nor will you get health during Corona, will not be able to go to hospital, cannot get employment, leave, will not even get MNREGA, the 100 days guarantee which Congress used to give, will not be available and I have passed Parliament House. I said that this country is one. Two countries cannot be formed inside this country,” he added.

Pointing out to the Demonetisation of high value currency notes in 2016, Gandhi said none of the rich people were standing in long queues outside banks to exchange their notes during that phase.

“The entire exercise of Demonetisation helped only the rich people while small businesses were eliminated,” the Congress leader said.

Gandhi said the Congress had assured that defectors will not be given tickets for the elections and the party has adhered to that promise.

On the issue of employment, he said, “Our entire focus will be on generating employment. We know how to create jobs. The Congress party understands this. We have done it too. We will show you once again.”

Here is the video link to the entire speech: