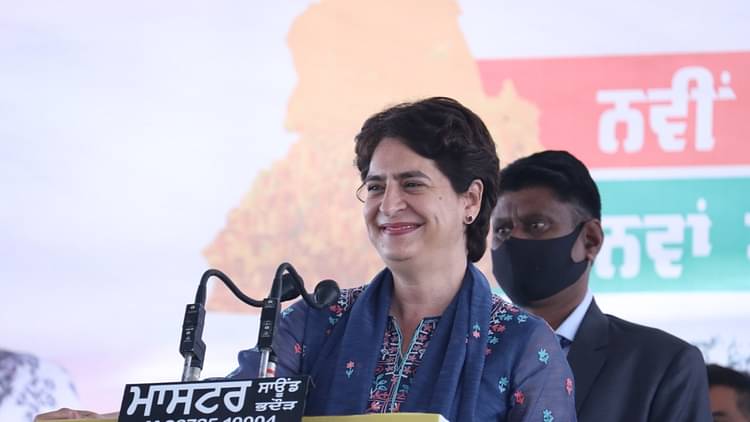 Priyanka cautioned voters in Kotkapura that they should not forget that the BJP came to power at the Centre in 2014 on the basis of the so-called "Gujarat model", which later turned out to be fake

Slamming the Arvind Kejriwal led Aam Aadmi Party (AAP), Congress leader Priyanka Gandhi on Sunday said that AAP had its origins in the right-wing Hindu organisation Rashtriya Swayamsevak Sangh (RSS) and that the so-called Delhi model projected by the party was a sham.

Addressing the ‘Navi Soch Nava Punjab’ poll rally in Punjab’s Kotkapura, Priyanka Gandhi said cautioned the voters against falling for AAP's claims."There is another political party which has come from Delhi. You are being shown a Delhi model through advertisements and people come to you and propagate the Delhi model and the (work done by the) government in Delhi," she said.

Vadra told the people at the gathering that they should not forget that the BJP came to power at the Centre in 2014 on the basis of the so-called "Gujarat model", which later turned out to be fake."There were big advertisements (claiming) so much development took place in Gujarat, everybody is getting rich, everything is prosperous. But what happened? That model was only in advertisements," she said.

The AAP government has been a "failure" in Delhi, she said.Campaigning for the Congress candidate from Kotkapura, Ajaipal Singh Sandhu, she said, “The Punjab government should be run from Punjab, not from Delhi as will be done if AAP or BJP come to power.”

Priyanka Gandhi Vadra also emphasised that CM Channi of the Congress party is “a common man among you”.Attacking the BJP-led central government over farmers’ issues, she said, “Many people lost their lives in the farmers’ agitation but you all did not bow down. That’s Punjabiyat. I understand Punjabiyat. You all know I married a Punjabi man. My children have Punjabi blood. Punjabi people have brave hearts.”

Referring to previous Congress chief minister Capt Amarinder Singh's tenure, Priyanka Gandhi, without naming him, said, "It is true that for five years we had a government here, it is also true that there were some deficiencies in that government. It got lost somewhere on the way."

More in this category: « Congress protests against ED raids on Punjab CM’s kin in virtual interaction with CEC