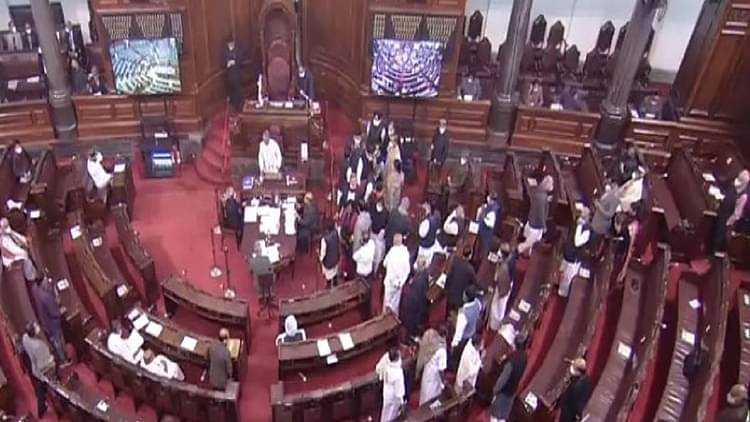 Rajya Sabha was adjourned for the day on Tuesday without transacting substantial business as Congress and other opposition members created an uproar demanding discussion on the three new farm bills.

Rajya Sabha was adjourned for the day on Tuesday without transacting substantial business as Congress and other opposition members created an uproar demanding discussion on the issue of farmers' protest over the three new farm bills.

The House was first adjourned for about 40 minutes till 10:30 am, then till 11:30 am and then to 12:30 pm.When the House re-assembled at 12:30 pm, protesting members again trooped in the Well raising slogans, forcing Deputy Chairman Harivansh to adjourn proceedings for the day.Before adjourning the House, the Deputy Chairman appealed to members to return to their seats and follow COVID-19 protocols. However, they did not heed to his requests.

Four bills were listed for consideration and passing in the legislative business for the day. They were: The Major Port Authorities Bill, 2020; The National Institutes of Food Technology, Entrepreneurship and Management Bill, 2019; The Medical Termination of Pregnancy (Amendment) Bill, 2020; and The National Commission for Allied and Healthcare Professions Bill, 2020.

Earlier in the day, Congress, Left, TMC, DMK and RJD members first walked out from Rajya Sabha after their demand for suspension of business of the day for taking up the discussion was rejected by the Chair.Opposition members shouted slogans to disrupt the Question Hour, forcing Chairman M Venkaiah Naidu to adjourn proceedings till 10:30 am.As the sloganeering continued, Naidu asked the opposition members to return to their seats."Please go to your seats and allow the House to function. Some of you said the last time that not having question hour is 'murder of democracy'. This is a statement made outside," he said.

"Members who have walked out and again coming to the Well is not fair," Naidu said before adjourning the House for the first time.When the House met at 10:30 am, the sloganeering continued and the Deputy Chairman, who was in the Chair, tried to persuade members to allow the House to function.However, as the opposition members did not yield, he adjourned the proceedings till 11:30 am. At the time of adjournment, ports, shipping and waterways minister Mansukh Mandaviya was speaking on The Major Port Authorities Bill, 2020.

Earlier, Parliamentary Affairs Minister Pralhad Joshi said opposition members themselves were demanding Question Hour and the government agreed."Question Hour is going on....whether they (protesting members) want Question Hour or not, let them place it on record," he said, as opposition members were raising slogans.Opposition parties including the Congress, Left, TMC and DMK had given a notice under rule 267 that calls for setting aside of business of the day to take up a discussion on the issue pressed.Chairman Naidu had, however, disallowed the motion saying the members were free to raise the issue during the discussion on Motion of Thanks to the President's address.

When the House met for the day, Naidu said he has received notice under rule 267 from various members but the issue can be raised during the discussion on Motion of Thanks to the President's address to the joint sitting of both houses of Parliament.The President, he said, had referred to the farmer's agitation in his address made at the start of the Budget session of Parliament last week.While Lok Sabha is scheduled to start a discussion on the motion on Tuesday, Rajya Sabha will do so on Wednesday."As we are going to start a discussion on Motion of Thanks to President's Address tomorrow, members can participate and raise their concerns," he said rejecting the 267 notice.

He said several rounds of discussions have happened between the government and the farmers' group."I understand the concern (of members) for the need to resolve the issue at the earliest date," he said.Naidu, however, allowed members who gave notices to make very brief mentions.Thousands of farmers have been protesting at the Delhi borders with Haryana and Uttar Pradesh, demanding a rollback of the Farmers' Produce Trade and Commerce (Promotion and Facilitation) Act, 2020; Farmers (Empowerment and Protection) Agreement on Price Assurance and Farm Services Act, 2020; and the Essential Commodities (Amendment) Act, 2020.

Leader of the Opposition and senior Congress leader Ghulam Nabi Azad said the farmers have been camping for more than two months and the issue needs to be discussed.Sukhendu Sekhar Roy (TMC) said the House is not aware of what is going on between the government and farmers and the House should discuss the issue separately from the Motion of Thanks.

"We want a discussion on a specific issue," he said.

While CPI leader Elamaram Kareem said water and electricity supply to the protests sites has been cut, DMK's Tiruchi Siva said farmers have been sitting on roads for over two months in the cold and the issue needs to be discussed separately.

Manoj Jha (RJD) said Parliament should at least discuss the issue.However, Naidu did not agree to their motion after which the members of Congress, Left, TMC, DMK and RJD staged a walkout."No one is stopping you from discussing the issue tomorrow. Tomorrow you will get an opportunity," he said.Naidu said 10 hours have been allocated for discussion on Motion of Thanks to the President's address and an equivalent amount given for discussion on Budget.

More in this category: « ‘Need to fight for farmers’ rights’: Unanimity prevails at all-party meeting convened by Capt Amarinder Singh Opposition Leaders Get Vocal for Farmers as Centre Carries Out Unprecedented Fencing Op »