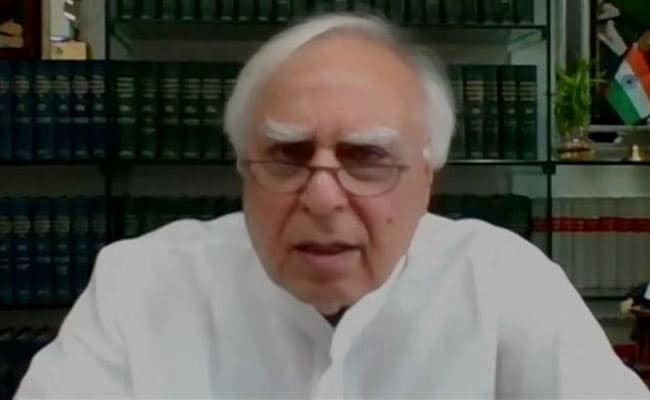 Over the last two weeks, Sachin Pilot has mounted a mutiny against Chief Minister Ashok Gehlot with the support of 18 other MLAs who are sequestered in BJP-ruled Haryana.

New Delhi: You can't be Chief Minister of a state with the support of just 20-25 legislators, Congress leader Kapil Sibal told party rebel Sachin Pilot through a news conference on Friday, hours after the sacked Rajasthan Deputy Chief Minister scored a temporary reprieve at the high court. "You can't make party a tamasha (grand show) before the public," Mr Sibal said.

"I want to ask Sachin, do you want to become Chief Minister? Tell us. Why the protest? If you say you are not joining the BJP, then why are you sitting in Haryana? Why didn't you attend Congress meetings?" he said.

"Do you want to form your own party? Whatever it is, come out and speak. Don't sit inside a hotel," Mr Sibal, a senior advocate who represented the Rajasthan Speaker in the Congress's Supreme Court battle against Mr Pilot's squad, said."The party is intrigued at your actions. You can't make party a tamasha before the public. I am sure that is not your intention ," Mr Sibal said.

Mr Sibal also attacked Rajasthan Governor Kalraj Mishra for not calling an assembly session, accusing him of ignoring his constitutional responsibility and acting at the instance of the central government.

"There is today a new definition of democracy and a new way of functioning of governors of states in this country. Governors are supposed to uphold the Constitution and the laws, but governors in this country are acting at the behest of the Union government," he said.Over the last two weeks, Mr Pilot has mounted a mutiny against Chief Minister Ashok Gehlot with the support of 18 other MLAs who are sequestered in BJP-ruled Haryana.

The Congress has a narrow lead over the opposition and has only two more than the majority-mark of 101 in the 200-member Rajasthan assembly. Team Pilot has 19 MLAs and the BJP has 72. Including smaller parties and independent members, the opposition has 97 at the moment.

The Congress on Friday said it will approach the Supreme Court hours after the Rajasthan High Court said that no action can be taken against Sachin Pilot and other rebel party leaders for now.

The order had been seen as a reprieve for the group against immediate disqualification by Speaker CP Joshi even though the verdict was delayed after the high court accepted Team Pilot's eleventh-hour request to add the centre to the case so it can weigh in on whether the anti-defection law applies to them.

On Thursday, the Supreme Court, where Mr Sibal defended the Speaker, had refused to stop the High Court from delivering the verdict, saying the "voice of dissent" cannot be suppressed in a democracy.

Speaking to NDTV on Friday, Mr Sibal said, "How does the court know it is dissent within the party? His demand was to become Chief Minister in a year. Is it dissent?"

Talking about the high court order, he said, "If judges of high courts are not going to follow orders laid down by five judges of the Supreme Court, then I might as well take off my robes."