Puja on the cricket pitch is fine but namaz in dressing room is unwelcome? Featured 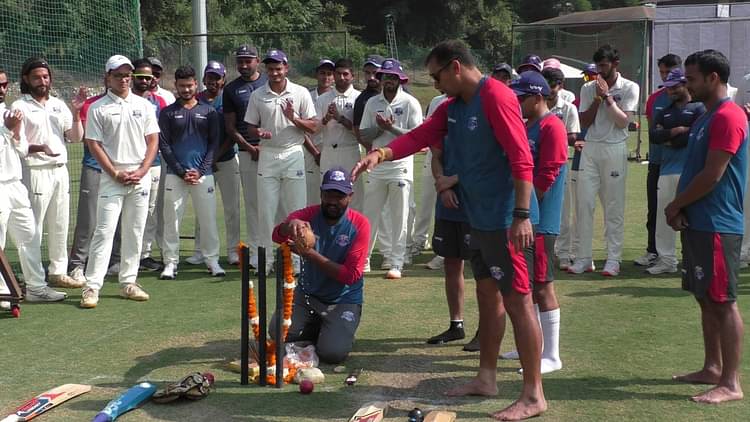 CAU Secretary Mahim Verma accused coach Wasim Jaffer of allowing Friday prayers in the dressing room, a charge that the cricketer has denied. But cricket association had allowed puja on the pitch.

Cricket Association of Uttarakhand (CAU) which had accused former Team India and Test player Wasim Jaffer of communalizing cricket and forced his resignation as coach, is unable to explain a photograph on its website showing a puja on the pitch.

Secretary of the CAU Mahim Verma had accused Jaffer of allowing Friday prayers in the dressing room, a charge that the cricketer denied. But tongues are wagging on the conduct of the cricket association, which clearly sees nothing amiss in holding religious ceremonies on the cricket pitch. If praying in the dressing room amounts to communalizing cricket, why is puja on the ground acceptable?

The photograph on the association’s website of the ceremony is said to be from October 2020. The selection of the senior cricket team was then preceded by religious rituals in the presence of the team manager Navneet Mishra. Barefooted officials can be seen with flowers, garlands, incense sticks and a coconut propitiating the stumps in the presence of bemused players.

The maulvi had been invited by the captain Iqbal Abdullah and not him. On his part Iqbal Abdullah claimed that he had sought and obtained the permission of the team manager Navneet Mishra. But cricket fans, players and the rival lobby of the association are asking how the association can disown its own role in conducting a religious ceremony on the ground.

The controversy refuses to die down. Wasim Jaffer had cited interference in selection by the Secretary of the Cricket Association of Uttarakhand (CAU) and in day-to-day training and practice of the team. Undeserving players were being promoted by the secretary, he had said.

The secretary, Mahim Verma, in turn accused the coach of communal bias. He was accused of favouring Muslim players and arranging ‘maulvis’ for holding Friday prayers in the dressing room and of violating the bio bubble created during pandemic.

Not surprisingly, BCCI is yet to officially comment on the incident. But a few Indian cricketers namely Anil Kumble, Irfan Pathan and Manoj Tewari came out in support of Wasim Jaffer. Congress leader and MP Rahul Gandhi also tweeted, “In the last few years, hate has been normalised so much that our beloved sports cricket has also been marred by it”.

The tweet prompted Uttarakhand Chief Minister Trivendra Singh Rawat to hold a discussion with office bearers of the association to discuss the issue. One of the vice-presidents of the association, Sanjay Rawat, happens to be the CM’s nephew. It was learnt that the Board of Control of Cricket in India (BCCI) is also contemplating an inquiry into the entire episode.

More in this category: « Farmers are heart of country, but when Tikait had tears in his eyes, PM was smiling: Priyanka Gandhi in UP Held with cocaine, Pamela Goswami demands arrest of BJP leader’s aide »