Farmers are heart of country, but when Tikait had tears in his eyes, PM was smiling: Priyanka Gandhi in UP Featured 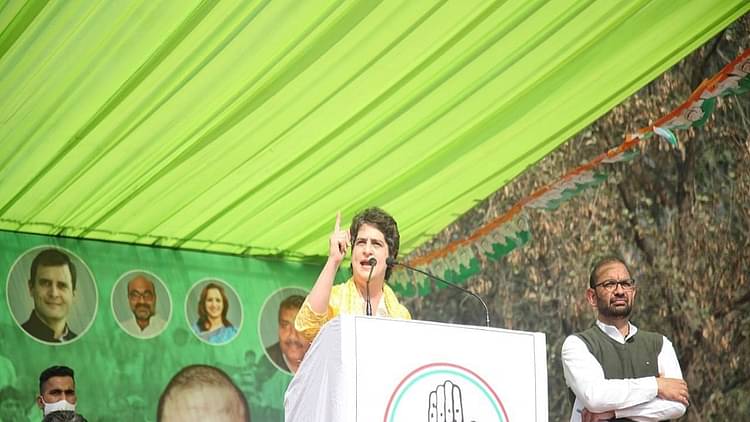 Priyanka Gandhi, while addressing the ‘Kisan Mahapanchayat’ in Muzzafarnagar district of Uttar Pradesh on Saturday lashed out at Prime Minister Narendra Modi and targeted his “arrogance.”

Congress National General Secretary and UP state in-charge, Priyanka Gandhi, while addressing the 'Kisan Mahapanchayat' in Muzzafarnagar district of Uttar Pradesh on Saturday lashed out at Prime Minister Narendra Modi and targeted his "arrogance."

She said,"In our old stories, kings and queens became arrogant after they won power. After becoming Prime Minister twice, the PM is also showing arrogance.""The Central government should respect the farmers. Why is Modiji not talking to the farmers who elected him as Prime Minister? Dialogue should be initiated with the farmers and their problems must be solved," she further said.
Priyanka Gandhi said Prime Minister Modi had promised there will be settlement of dues pending on sugarcane. She asked the farmers about the payment of dues of sugarcane."The Prime Minister bought two airplanes at a higher price than the money pending for sugarcane payments. Modi had promised that sugarcane dues would be paid but it has not been done. A scheme to construct a Parliament building costing Rs 20,000 crore has been floated but sugarcane dues have not been paid. The Electricity bills are rising. The BJP government earned 21.5 lakh crore from diesel tax, but there is no account of that money. Why did the farmers not get this money. "

Priyanka said the farmers are in anguish. Rich billionaires have earned thousands of crores and distraught farmers are sitting on roads. “The prime minister’s politics is only aimed at benefiting his billionaire friends”, she said.“The farmers are the heart and soul of this country. But when Tears flowed down Tikait’s eyes, there was a smile on PM’s lips,” Priyanka added. The farmers who send their sons to the border to fight the enemies, were insulted, humiliated and were called ‘deshdrohi’, ‘aandolanjeevi’, she said.

She said, "Taxes being levied on government mandis will not be given in private mandis. As a result, government mandis will be discontinued in the near future. The second law would include contract farming. With this billionaires would buy the crop of farmers in an arbitrary manner. The Minimum Support Price mechanism will end. They [the government] will give the farmers' land to their rich businessmen friends."

Reiterating her support for the farmers, Priyanka said that the farmers of this country are self respecting. She will support them in their struggle and will not betray them.

You can listen to her entire speech here:

More in this category: « ‘Rail roko’ protest: Trains stopped at many places across country by farmers demanding repeal of farm laws Puja on the cricket pitch is fine but namaz in dressing room is unwelcome? »