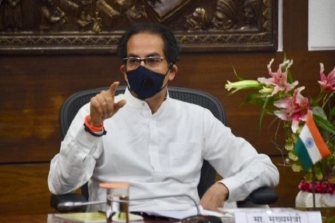 The ruling Shiv Sena on Friday said the Maharashtra BJP's agitation against the Uddhav Thackeray-led government during the COVID-19 pandemic will boomerang on the opposition party.

Instead of protesting in Maharashtra, Patil and former Chief Minister Devendra Fadnavis should instead stage their agitation in Kerala, the Marathi daily stated, taking a dig at the two senior BJP leaders.

There was a health emergency in the country and Prime Minister Narendra Modi was helming the fight against the COVID-19 pandemic, the publication said.

"If the opposition feels for the state and has any suggestions about fighting the pandemic, they should discuss it with the Chief Minister. Is the opposition party ashamed to do so or has it lost its self-confidence?" it questioned.

The editorial also highlighted the fact that although COVID-19 cases in the state were rising by the day, most of the patients were also recovering from the infection.

"If 10,000 patients have recovered, what does that indicate?" the editorial asked, citing the progress the state had made in fighting the virus.

The editorial went on to ridicule the BJP's 'Maharashtra Bachao' agitation, saying it was time to save the state from the opposition party.

Whatever issues the state BJP has raised was in the Central government's jurisdiction and the Chief Minister should send a delegation led by Fadnavis to the Centre with a list of demands from the state, the editorial suggested.

The BJP has been critical of the Shiv Sena-led government over its handling of the coronavirus crisis in the state, which has so far recorded 41,642 cases.

The BJP has asked its workers to hold black placards and wear masks of the same colour while registering their protest on Friday without violating social distancing norms.

Indecisiveness and strategic errors of the Maharashtra government have aggravated the COVID-19 crisis in the state, Fadnavis said on Thursday and accused Chief Minister Uddhav Thackeray of over-dependence on bureaucracy as he is "scared" of taking initiatives.

More in this category: « UK Court Orders Anil Ambani to Pay $717 Million to Chinese Banks Within 21 Days BJP Government in UP Playing Politics Over Congress Buses for Migrants Marked a New Low »