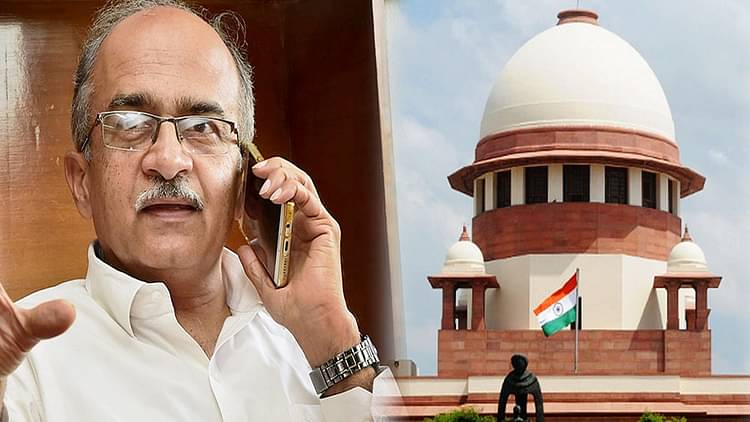 The Supreme Court’s hearing took place in a surcharged atmosphere as more and more lawyers and former justices including five chief justices extended support to Bhushan.

Supreme Court advocate and activist Prashant Bhushan came out of the Supreme Court on Thursday taller after the hearing on the fixation of his sentence. His principled exposition of the purpose behind his two controversial tweets in the course of this crucial hearing, won the heart of the battle though the bench stuck to its position on holding him guilty for contempt and gave him two-three days to change his statement.

Bhushan however gave the indication that there was no possibility of any change in his position though he would consult his lawyers. It was apparent that the bench headed by Justice Arun Mishra was cornered in the course of the hearing by the two leading lawyers Dr. Rajeev Dhavan and Mr. Dushyant Dave on the constitutional issues and the freedom of speech.

Bhushan, held guilty of contempt for his tweets on Chief Justice of India SA Bobde and the Supreme Court, told the top court that he was "pained" at being "grossly misunderstood" and that he considered his tweets an attempt to discharge his highest duty. After a sharp back-and-forth over whether his tweets had crossed the line, the Supreme Court gave the 63-year-old lawyer two-three days "to reconsider" his statement. "There is no person on Earth who cannot commit a mistake. You may do hundreds good things but that doesn't give you a license to do 10 crimes. Whatever has been done is done. But we want the person concerned to have a sense of remorse," said Justice Arun Mishra.

Prashant Bhushan's request to defer the hearing on his sentencing for contempt was rejected by the Supreme Court. "I am pained to hear that I am held guilty of contempt of court. I am pained not because of the would-be sentencing, but because I am being grossly misunderstood. I believe that an open criticism is necessary to safeguard the democracy and its values," he said.

"My tweets need to be seen as an attempt for working for the betterment of the institution. My tweets, I consider, was discharge of my highest duty. Apologising would also be dereliction of my duty. I do not ask for mercy. I do not appeal for magnanimity. I cheerfully submit to any punishment that court may impose," he said.

As the top court asked him to reconsider his statement, he said: "I may reconsider it if my lordships want but there won't be any substantial change. I don't want to waste my lordships' time. I will consult my lawyer." Justice Arun Kumar Mishra then replied: "You better reconsider it... don't just apply legal brain here."

Justice Mishra said this was his first such contempt ruling. "There is a Lakshman Rekha (boundary) for everything. Why cross it? We welcome pursuing good cases in public interest but remember, this is a serious thing. I haven't convicted anyone of contempt in 24 years as a judge. This is my first such order," he said.

The judge noted: "Freedom of speech is not absolute to anyone... to me... to Press. There's no problem in being an activist but we have to say this is the line."

Ten social activists came out in support of the activist lawyer in the Supreme Court, contending that the contempt proceedings initiated against him appears to be an assault on freedom of speech and expression.

The activists have filed an application to intervene in the contempt plea filed by Attorney General K K Venugopal against Mr Bhushan for his tweets in which he had said that the government appeared to have misled the top court and perhaps submitted fabricated minutes of meeting of the high-powered selection committee headed by the prime minister, in the appointment of M Nageswara Rao as interim CBI director.

The activists, including Aruna Roy, Arundhati Roy and Shailesh Gandhi, have said in their application that they were "concerned" about initiation of the contempt proceeding against Mr Bhushan for exercising his ''freedom of speech'' without fear. Interestingly, Attorney General KK Venugopal pleaded to the bench during the hearing not to impose sentence on Bhushan.

Besides, a separate application has also been filed in the top court by five senior journalists, including former union minister Arun Shourie, seeking to intervene in the case.

Mr Shourie and four others have said in their application that the court, while issuing notice to Mr Bhushan on February 6 on the contempt plea, had said it would examine whether in sub-judice matters, advocates and litigants briefing the media would amount to an interference in course of administration of justice.

During the hearing earlier, the bench headed by Justice Arun Mishra had said that court was not averse to media reporting of cases but lawyers appearing in sub-judice matters should restrain themselves from making public statements.

Besides Aruna Roy, Arundhati Roy and Shailesh Gandhi, the other applicants who have sought to intervene in the matter are Wajahat Habibullah, Harsh Mander, Jayati Ghosh, Prabhat Patnaik, Indu Prakash Singh, Bezwada Wilson and Nikhil Dey.

In separate application seeking to intervene in the matter has been filed by Shourie and four other senior scribes – Mrinal Pande, Paranjoy Guha Thakurta, Manoj Mitta and N Ram.

They have said in their application that any restraint on lawyers and litigants from commenting on matters pending in court would also amount to restraints on media from carrying those comments and any such order by the court would have "serious consequences on the freedom of the press, its rights under Article 19(1)(a) of the Constitution and its ability to inform the people about important public interest issues pending in the courts

Bhushan read out the written statement after the SC rejected his plea for deferment of hearing on the quantum of punishment for contempt.

"I believe that open criticism is necessary to safeguard democracy and its values. My tweets are attempts to discharge my duties, not else. My tweets need to be seen as an attempt for working for the betterment of the institution," Bhushan said.

"I am here, therefore, to cheerfully submit to any penalty that can lawfully be inflicted upon me for what the court has determined to be an offence, and what appears to me to be the highest duty of a citizen,” he said.