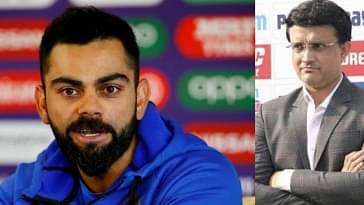 India Test skipper Virat Kohli on Wednesday said the BCCI never asked him to reconsider quitting T20 leadership as claimed by the Board and his removal from ODI captaincy happened 90 minutes before the team's selection for the upcoming South Africa tour.

At the pre-departure press meet before the South Africa tour, the Indian skipper took all the tough questions head on and said that he would put his full support behind new white-ball skipper Rohit Sharma and head coach Rahul Dravid's "vision". He said he understands that not winning an ICC white ball trophy led to his removal.

"Whatever was said about the communication that happened about the decision that was made was inaccurate," Kohli said with obvious reference to BCCI president Sourav Ganguly's statement about the Board requesting him not to quit as split captaincy might not work in the white-ball format.

"I was contacted one and half hours before selection meeting on 8th for Test series and there was no prior communication to me at all since I announced my decision on T20 captaincy.

"...the chief selector discussed the Test team to which we both agreed. Before ending the call, I was told that the five selectors have decided that I will not be the ODI captain to which I replied 'okay fine'," the 33-year-old added as he recalled the sequence of events.

"In the selection call afterwards we chatted about it briefly and that's what happened."The discord between Kohli and the BCCI mandarins came out in the open when he was asked the next question.But you had only stated that you wanted to remain captain till 2023 ODI World Cup?

"Was it a question?" Kohli smiled."Yes, it is a question because you had only said you wanted to remain India's ODI captain?," the reporter again asked."When I left the T20 captaincy, I had first approached BCCI and intimated them of my decision and laid down my point of view in front of them (office bearers).

"I gave the reasons why I wanted to quit T20 captaincy and my view point was received very nicely. There was no offence, no hesitation and not for once was I told that 'you should not leave T20 captaincy'," Kohli said, in complete contradiction to what Ganguly had stated a few days earlier.

Kohli said the BCCI brass called his decision a progressive one.

"On the contrary, the BCCI called it a progressive step and in the right direction. At that time I had communicated that, yes I would like to continue in Tests and ODIs unless office-bearers and selectors think that I shouldn't carry on with this responsibility."I had clarified on my call and communication to BCCI was clear. I had given that option if office bearers and selectors think otherwise, then it's in their hands (their call)."

Ganguly had stated that Kohli's decision to not reconsider giving up T20 captaincy prompted the selectors to go for Rohit as the sole white-ball skipper as two different captains in the two formats would have led to "too much leadership."

"We had requested Virat not to step down as T20 captain but he didn't want to continue as captain. So, the selectors felt that they cannot have two white ball captains in two white-ball formats. That's too much of leadership," the BCCI president and former India captain had told PTI.

Rohit also replaced a woefully out of form Ajinkya Rahane as Kohli's deputy in the Test format.