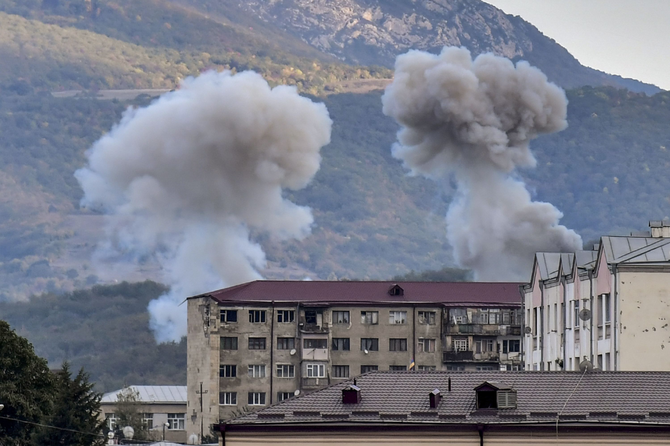 The bombardment by Armenian armed forces of densely populated civilian areas and installations along the frontline has been deliberate and targeted. To prevent further military aggression by Armenia and provide for the security of civilian residential areas, the armed forces of Azerbaijan undertook counter-offensive measures within the right of self-defense and in full compliance with international law.

This new act of aggression by Armenia is a continuation of the latest provocations, including the attempted armed attack in the direction of Tovuz region on July 12-16, the sabotage-reconnaissance group’s provocation in the direction of Goranboy region, the illegal settlement policy in the occupied territories of Azerbaijan, as well as the provocative statements and activities of the Armenian leadership.

The clashes are the worst since the 1990s, when some 30,000 people were killed, and are spreading beyond the Nagorno-Karabakh region. By constantly violating the cease-fire achieved in 1994, Armenia tries to consolidate the existing status quo. Azerbaijan has repeatedly stated that Armenia’s continuing military aggression and the presence of its armed forces in Azerbaijani territories remain a significant threat to regional peace and security.

For the past two years, a chain of provocations by the new government of Armenia in both word and deed has undermined the negotiation process for settlement of the conflict. Armenia has continued to provoke and violate the cease-fire. Armenia’s defense minister even went so far as to call on the country to prepare for the pursuit of a “new war for new territories.”

In the intervening decades, the one constant has been the Armenian occupation of almost all of Azerbaijan’s autonomous territory of Nagorno-Karabakh and seven surrounding regions of Azerbaijan, which together form about 20 percent of the country’s total territory. Armenia conducted a policy of ethnic cleansing against Azerbaijanis.

The cultural heritage of the Azerbaijani people and 63 of 67 mosques in the territory of today’s Armenia have been demolished and plundered. Armenia also destroyed all Azerbaijani historical and religious monuments in the occupied territories.

It is not the issue of dispute that these lands are occupied illegally and must be returned. Four UN Security Council resolutions and various OSCE documents directly related to the conflict make this clear, as do the formal positions of all the major powers, not to mention the rest of the world.

The fact that Armenia has cleansed the occupied lands of its pre-war ethnic-Azerbaijani population has obviously not helped its claim of victimhood. Neither has its present campaign to indiscriminately shell civilian targets such as marketplaces or key pieces of infrastructure such as hydro-power plants and dams deep in Azerbaijan.

Peace and stability in the South Caucasus will be restored only after the liberation of all occupied Azerbaijani territories.

So, irrespective of ancient grievances, a convoluted historical record and whatever other vagarious claims have been put forward, the situation is unambiguous. The outcome of the conflict requires the end of Yerevan’s military occupation of these lands and the return of more than one million Azerbaijani civilians to their homes.

The mediators — the co-chairs of the OSCE Minsk Group (Russia, France and the US) — are at fault. There was a formal negotiation process launched in 1992, which has produced no concrete results on the ground, in the sense that the occupation of Nagorno-Karabakh and the seven surrounding regions of the Republic of Azerbaijan has not come to an end, Azerbaijani refugees and IDPs have been prevented from exercising their right of return, and so on. In other words, for nearly three decades the Minsk Group led negotiations whose objectives were clearly and unambiguously set down on paper.

The co-chairs gave themselves the responsibility to lead a defined process to achieve a defined result, and yet the conflict has remained frozen since a 1994 cease-fire was put into effect. None of the Minsk Group’s defined objectives have been achieved — not even close.

As a result of Armenia’s artillery and missile attacks, more than 30 Azerbaijani civilians were killed, more than 150 injured, and more than 500 residential buildings and civilian objects destroyed (as of Oct. 7).

In his speech to the 75th General Assembly of the UN, Azebaijani President Ilham Aliyev warned that the situation was escalating as a result of Armenia’s actions and that there was increased military activity by Armenian troops along the line of contact.

Our president has demanded that Armenia set up a timetable to withdraw from the occupied territories of Azerbaijan, to recognize the territorial integrity of Azerbaijan and to apologize to the Azerbaijani people.

On Oct. 4, President Aliyev stressed Baku’s determination to liberate Nagorno-Karabakh from Armenian occupation, as he criticized the international community for failing to take any action against Yerevan’s aggression.

“Karabakh is Azerbaijani territory. We must return, and we will return,” he said in a televised address, adding that Azerbaijan had waited 30 years to recover its lands.

“Baku’s repeated calls for sanctions on Armenia went unheard,” the president said, as he noted his country demands to know why OSCE and the EU did not punish Armenia for its crimes. He said that Armenia must accept that Karabakh did not belong to it and set a timetable for the withdrawal of its occupation forces.

Our country needs political support from the Islamic world and the Arab world. They must have a firm position on Azerbaijan. The world must not equate the aggressor and the victim.

Azerbaijan has a strong army, and reports that foreigners are fighting alongside Azerbaijani troops do not reflect the truth. On the contrary, Armenia recruits and uses mercenaries and terrorists from other countries against Azerbaijan. The Armenian government is using the conflict to divert attention from its economic problems and to influence public opinion in the country.

It should be once more stressed that peace and stability in the South Caucasus will be restored only after the liberation of all occupied Azerbaijani territories.

More in this category: « Armenia, Azerbaijan agree ceasefire, start of 'substantive' talks Why India Simply Refuses To ‘Name & Blame’ China At Global Forums Despite All Its Hostilities? »