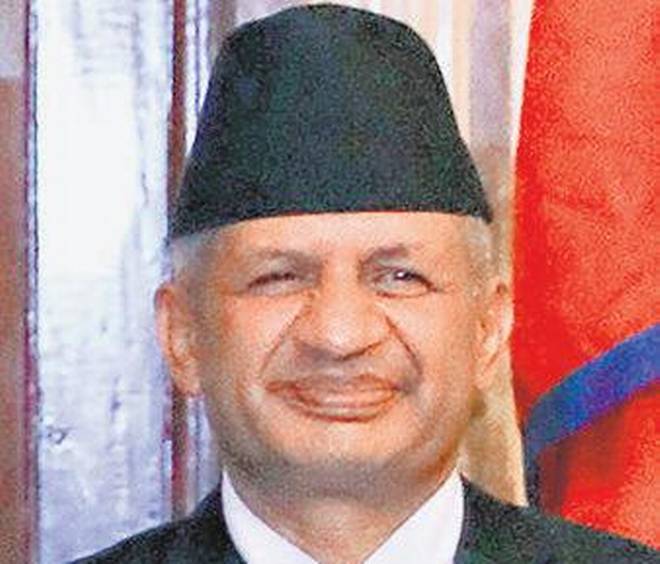 He said a solution to the border dispute should be found urgently, even as Indian sources confirmed that they were closely monitoring the debates in Nepal’s Parliament to provide a constitutional guarantee to the new map that shows the disputed region as part of Nepal’s sovereign territory.

“We want India to honour the letter and spirit of the [Sugauli] Treaty. The most appropriate way of doing this would be to withdraw security forces from Kalapani and hand over the above territories back to Nepal. We merely reiterated that unilateral acts like road construction in Nepal’s territory should not have been done, and the issue should be resolved through talks at the earliest,” Mr. Gyawali said in an interview to The Hindu.

Mr. Gyawali said Nepal appreciated the ties it shares with India but was disappointed with the November 2019 political map of India that brought the issue back to the table. “The map is a breach of the 1997 understanding that both sides had reached during the Kathmandu visit of Prime Minister I.K. Gujral,” he said.

The comments from the senior Minister of the government of Prime Minister K.P. Sharma Oli came as the Nepalese government gave more time to the main Opposition Nepali Congress to discuss a proposed amendment to the Constitution. The move is being interpreted as a window of opportunity for diplomacy. However, Mr. Gyawali said the amendment was on track and expected to be fast-tracked in the coming days.

India has taken note of the parliamentary debates, with informed sources saying the South Block is “carefully following” the developments in Nepal. South Block’s concerns about the Kalapani region is of particular significance as the Lipulekh pass in the region connects India with Tibet.

“Border issues are sensitive and require trust and confidence to be resolved to the mutual satisfaction,” said a source, indicating a change in thinking. Earlier, officials had said India would consider discussion on the Kalapani issue after the COVID-19 pandemic was dealt with.

The Constitution is the fundamental law of the land. The Constitution has to recognise the country’s salient features, including territory. Every country’s Constitution stipulates the provision pertaining to territory in one way or the other. The measures we have taken lately in assertion of our sovereign territory does not at all preclude settlement of boundary matters through talks.

Nepal’s effort has always been for early holding of the dialogue. Even before the COVID-19 crisis started, we pursued with the Indian side for fixing the dates of the meeting of the Foreign Secretary-level mechanism that was mandated by the Prime Ministers of the two countries to work on the outstanding boundary issues. That did not happen, as there was no confirmation from the Indian side. On your question about our Ambassador’s meeting with the officials in Delhi, the situation is not like the way it is presented in some media.

Historical documents should not be seen in that way. In fact, the Sugauli Treaty was a product that came up after Nepal lost wars with the British India. It is not at all a matter of pride for Nepalis to recall the Treaty, as Nepal lost nearly one-third of its territory. Nonetheless, the fact cannot be denied that the same treaty defined the boundary between the two countries in the area we are talking about. It is also pertinent to mention here that modern boundary mapping by the joint survey teams of the two countries started in 1981 and through that nearly 25-years-long joint exercise, the survey teams were able to jointly prepare maps of most of the international boundary alignment between the two countries.

On what basis did the survey teams do that exercise? Of course, on the basis of historical treaties and maps and documents, geographical attributes and other agreeable basis of international boundary delineation. Again, except the Sugauli Treaty and its subsequent agreements, including that of 1860, no other treaty between Nepal and India define our boundary. Where will we reach then discarding this historical document? As regards the status of the territories in question, these are Nepali territories as per the Sugauli Treaty and we have evidence to prove that.

Chinese forces have moved in Ladakh along India's Himalayan borders to assert its dominance. Is it all coincidental that the Kalapani dispute erupted more or less simultaneously?

Nepal pursues an independent foreign policy and the policy of close and friendly relations with both of our neighbours. It is totally baseless, therefore, to link our independent decisions with developments elsewhere. Why is it ignored that when India published its new political map in November 2019, we firmly opposed and made public our views against the unilateral act and insisted again that the dispute be resolved through talks?

And this time, when there was an announcement on the unilateral act of road construction, we were bound to raise our point. Therefore, the tendency of ignoring how the issue evolved and weaving, instead, a baseless narrative that Nepal is acting at the other’s behest is not helpful and may distract us from a more constructive approach of tackling the issue. We are doing a disservice to our relations by such a negative insinuation and by ignoring and brushing aside the real issue, which is early working for agreeable boundary alignment in the Kalapani-Lipulekh-Limpiyadhura region.

Can a swap between Susta and Kalapani be an acceptable solution to Nepal?

I know people are most interested in this question; the question of how this contesting claims on territory can be settled. Only the outcome of talks would determine the nature and content of the future agreement. It is apparent that resolution may not be easy, but there is no other way than settle it respecting the historical facts and evidence. In Nepal and India,

everyone with the knowledge of history and geography knows Kalapani, together with Lipulekh and Limpiyadhura, belongs to Nepal. We cannot deny this fact. What we are asking for is early convening of bilateral talks to resolve this issue in keeping with traditionally warm and cordial ties that exist between our two close neighbours.

What is the status of the Susta dispute. Can you please state the latest negotiating position of Nepal on this issue?

The strong protest from Nepal after India inaugurated the Lipulekh link road has surprised many observers.

There is no element of surprise in our statement. As you are aware, the territories east of Kali River, including Kalapani, Lipulekh and Limpiyadhura, belong to Nepal as per Article (V) of the Sugauli Treaty.

We want India to honour the letter and spirit of the treaty. You may recall that Nepal had opposed when India published a new political map in November 2019 and urged the government of India to rectify the map. The most appropriate way of doing this would be to withdraw security forces from Kalapani and hand over the above territories back to Nepal. We merely reiterated that unilateral acts like road construction in Nepal’s territory should not have been done and the issue should be resolved through talks at the earliest.

Nepal and China signed almost 20 agreements last October. A cargo agreement has been operationalised on Monday. What are Nepal's long-term connectivity plans through China?

As stipulated in the Trans-Himalayan Multidimensional Connectivity Network, our connectivity agenda with China encompasses transport infrastructure, transit arrangements and transmission infrastructure, among others. With India, we already have a vast network of connectivity that includes road connection which is being further upgraded; railway connection under progress; integrated checkposts;

transit arrangements and port facilities, transmission interconnection and lately, the planned waterways. The agenda of a transit treaty review is on in order to make transit arrangement more streamlined. The Railway Service Agreement is also being reviewed to further expand its scope. So, Nepal looks to both its neighbours when it comes to connectivity.

Nepal’s Defence Minister Ishwor Pokhrel has drawn the Gurkhas of the Indian Army into the controversy saying the Indian CoAS’ comments are an insult to the Nepali Gurkha soldiers working in the Indian Army.

He may simply have been referring to a feature of arrangements that a number of Nepali nationals have been serving in the Indian Army and have made sacrifices for India’s peace and well-being, thereby emphasising that India should be sensitive to Nepal’s concerns.

PM Oli’s comments on Indian symbols like the Ashokan lions were unexpected. Can you provide some context to these expressions?

A bit of clarity is needed here. In fact, the Prime Minister in his statement was elevating the dignity of India’s national emblem by underlining the sanctity of Satyameva Jayate. He was simply saying: let the truth prevail, not our ego and arrogance. One pertinent point I would like to mention here is that with a view to making Nepal-India relations reflective of the 21st century needs, we established the Eminent Persons Group on Nepal-India Relations (EPG-NIR).

After a detailed study, deliberations and consultations for over two years, the EPG-NIR has come out with a consensus report. It is waiting for the submission of the report to the two governments. I believe that the implementation of their recommendations will help address some of the difficult issues left by history and enrich the substance of our relationship consistent with the present day realities.

More in this category: « Ready to Mediate in Raging Indo-China Border Dispute: Donald Trump During the Pandemic, Rahul Gandhi Has Emerged as a Strong Leader »