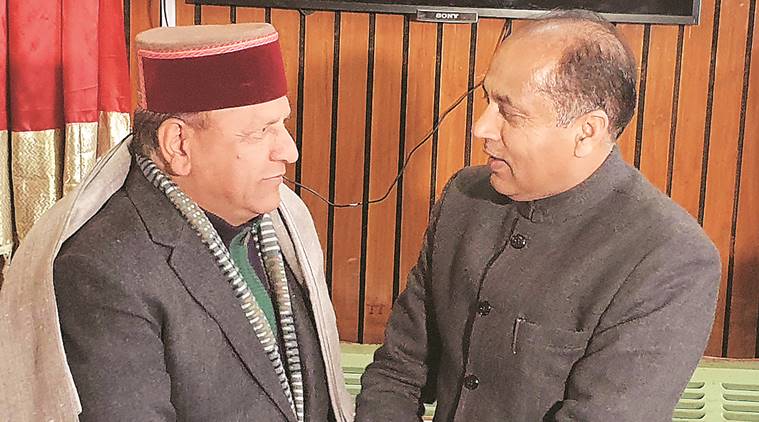 The resignation comes a week after the vigilance and anti-corruption bureau arrested the director of health services, Dr A K Gupta, following a probe into an audio clip in which two men are purportedly heard discussing the handover of Rs 5 lakh.

LEAVING THE ruling BJP red-faced in Himachal Pradesh, the party’s state president, Dr Rajeev Bindal, resigned from the post Wednesday, “on the basis of high moral grounds”, amid a corruption probe into the procurement of medical supplies by the government for the Covid pandemic.

Bindal, 65, was Speaker of the State Assembly until January, when he was picked by BJP national president J P Nadda to head the party in the state. His resignation comes a week after the vigilance and anti-corruption bureau arrested the director of health services, Dr A K Gupta, following a probe into an audio clip in which two men are purportedly heard discussing the handover of Rs 5 lakh.

The 43-second clip had led the Opposition Congress to target the government, with the party’s state in-charge Rajni Patil alleging that the person heard “offering the bribe” is a “ruling party leader”.Former BJP CM Shanta Kumar said the alleged scam made him want to “bow one’s head in shame”.Bindal, however, denied any link to the case, and said that he had resigned so that the probe is “not influenced in any way”. The BJP said in a statement that Nadda had accepted the resignation.

“Recently, an audio clip of the director of health services went viral following which the state government took prompt action and the director was booked and arrested, and investigation by vigilance bureau is on. Meanwhile, fingers were pointed at the BJP in an indirect way by some people,” Bindal said in his resignation letter.Recounting the relief work being undertaken by his party during the pandemic, Bindal said: “Because I am the BJP state president and we want this alleged corruption to be thoroughly probed and so that there is no pressure of any kind and the probe is not influenced in any way, I am tendering my resignation keeping in mind high moral grounds. It is to be kept in mind that I am only resigning on the basis of high moral grounds.”

When contacted by The Indian Express, Bindal said that “everything is written in the letter” and “no other meaning should be taken out of it”.Bindal, a five-time MLA, is a graduate of ayurvedic medicine and surgery (GAMS), and was elected MLA from Solan thrice and is currently serving a second term from Nahan.

Dr Gupta was arrested on the night of May 20 and booked under the Prevention of Corruption Act, after vigilance officials obtained the purported clip in which two men can be heard discussing a delivery of Rs 5 lakh. The clip does not reveal the identities of the two.In the clip, a man is heard saying: “Leke aa raha hun samaan apka, ji (I am bringing your goods). Another man replies: “Thik hai, le ao. Kitna le aye (Ok, bring it, how much are you bringing?).”

The conversation continues with the first man saying: “Sir, aapne 5 lakh bola tha, janab (You had mentioned 5 lakh).” The other man replies: “Thik hai, le ao (Ok, bring it).”Earlier, speaking to The Indian Express, SP Shalini Agnihotri, from the special investigation unit probing the case, had said the bureau had verified the contents of the audio clip “through sources”.

“The investigation points towards corruption in the purchase of various medical supplies and equipment from February onward. These purchases involved multiple suppliers, including those from outside the state,” she had said.

ADG Anurag Garg had said that Gupta was arrested after several hours of questioning during which he gave “evasive and misleading replies” and “showed selective amnesia in recalling the events of the past couple of days”.

“The mobile phone and voice samples of both Gupta and the other person have been sent to a laboratory for forensic examination,” he said.Gupta was hospitalised after his arrest, due to “diabetes and abnormal blood pressure”, and remanded in police custody on Tuesday.

More in this category: « During the Pandemic, Rahul Gandhi Has Emerged as a Strong Leader Border tensions: Imran Khan accuses India of ‘threatening its neighbours’ »