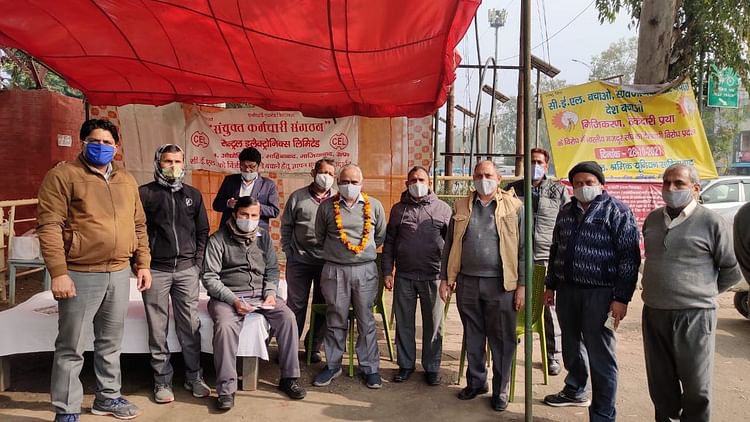 The Modi government has sold off a state-owned entity to a private firm having zero experience in making electronics parts or defence research, complained the protesters.

Braving bone-biting chill and rain, a group of employees sat on Dharna at the entrance gate of the state-owned Central Electronics Ltd (CEL) against the privatisation of the company which supplies electronics parts – used in missile and radar technology – to DRDO and ISRO

It was drizzling when this correspondent visited the protest site in Sahibabad on Monday. Due to cold, rain and Corona restrictions, though a large chunk of the protesters remained off the ground, the anger and discontent against the “blind sale” of the profit-making public-sector company, was palpable on the ground.

“Adani-Aambani ki sarkar murdabad-murdabad!,” employees were shouting slogans when NH met with them.

Going against the norms, the Modi government has sold off a state-owned entity to a private firm having zero experience in making electronics parts or defence research, complained the protesters, saying “CEL was valued at Rs 957 crore but the reserve price was set very low so that the company can be sold off easily."

Recently, Nandal Finance and Leasing Limited acquired the whole CEL including all of its property for just Rs 260 crore while the land belonging to the company alone is estimated to be worth Rs 450 crore.

Rambilas, joint secretary, CITU (Sahibabad unit), a CPM affiliated trade union said that the Modi government told media and the world that the company is running in loss while the truth is that the company has been posting profit since 2013.”

In the last financial year alone, the company has recorded a profit of more than Rs 30 crores, added Rambilas, a contemporary of Safdar Hashmi – the iconic theatre artist who was killed by the communal goons in 1989.

When asked how the government can show the loss if the company is making a profit, Ramblas replied, “They have only shown the loss-making arm of the PSU.”

As per the profile, CEL which was founded in 1974, comes under the Ministry of Science and Technology, works in three sectors:

3) Railway security – the third wing of the company has been working on developing safety measures for the railway called Drishti.

Apart from this, the company has also been involved in making bulletproof jackets and reading devices Drishti Nayan for the specially abled..

CEL comes among the top 6-7 companies that produce radome for missiles, laser-based Perimeter intruder Detection System (PIDS), piezo-electric generator fuse for Heat-55 for ordnance factories and circulator and isolator for satellite systems in the world.

“Despite being very crucial for the defence manufacturing and India’s security, the Modi government chose to privatise the company…the government has compromised with the national security,” blamed Sanjay Kumar of the CITU.

Calling Modi governed real ‘anti-national’, Sanjay said, “First attempt to privatise the CEL was made in 2018 but no bidder had come forward.”

“Then after diluting the bidding-clauses, the Modi government invited bid again in 2019 for the second time. Service-clause has been diluted significantly as happened in the case of the Air India sale,” added Sanjay.

More in this category: « Why the Privatisation of Central Electronics Limited Is Against India's Interests Moody’s downgrades Pakistan’s rating outlook »